Tardigrades: The Indestructible Creatures Living in Your Backyard 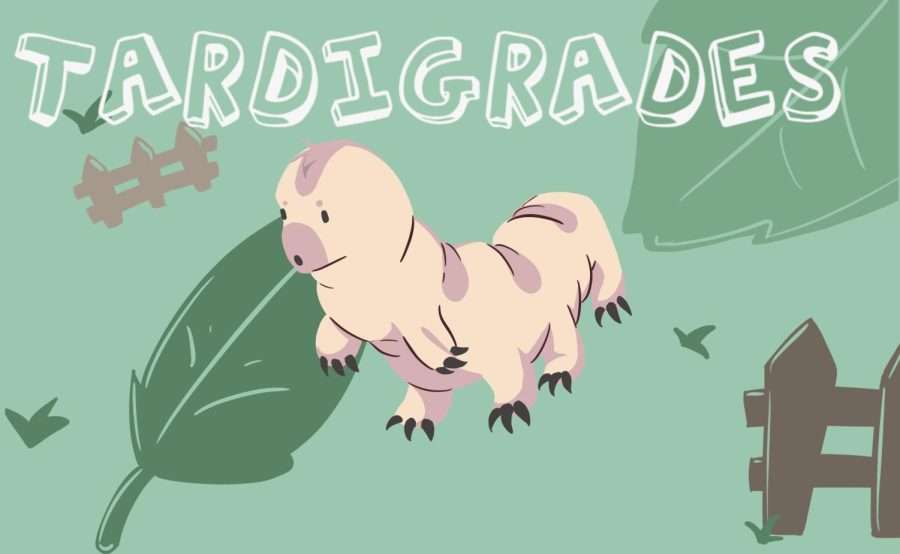 Imagine a creature that is able to withstand extreme temperatures, survive in the vacuum of space, resist heavy radiation, and even live through a global extinction event with ease. You may wonder if such an organism exists at all. Surely no living thing is sturdy enough to endure through all of these unfavorable conditions, right? Although it may seem absurd, there is one such creature that will survive all of the extremes, the tardigrade. What’s more is that to find one of these creatures, you don’t have to look further than your own backyard!

So, what are these “water bears”?

The reason that you may not have ever seen a tardigrade is because they are microscopic. Tardigrades are only around 0.5 millimeters in length, so you would need a microscope to observe them. They have eight legs, with four to six claws on each.

Tardigrades are commonly nicknamed “water bears” because of their resemblance to miniature bears. They appear squishy and soft, but don’t let this fool you! The outer layer of the tardigrade is actually covered with a durable cuticle, similar to the exoskeletons of other insects. One interesting part of a tardigrade’s physiology is that it has a special mouth, called a bucco pharyngeal apparatus.

Tardigrade is a phylum classification, which represents around 1,300 different species. Due to their high survivability, these species can be found around the world, but prefer to live in environments with water. This could mean the ocean, a lake, or even a moist piece of moss. If you pick up the next piece of moss you find and examine it under a microscope, chances are that there will be at least a few tardigrades hiding inside. However, the vast number of tardigrade species have been observed in almost every imaginable environment, from the desert to the deep sea.

How these “moss piglets” so durable?

By now, you know that they can live at temperatures close to absolute zero, far above boiling, and survive the radiation and vacuum of space, but how do they do it? It turns out that these tiny creatures have a few tricks up their sleeves to make themselves a lot more indestructible.

One “trick” that tardigrades use in unfavorable conditions is the employment of protective proteins. This is how they are able to survive extreme temperatures and radiation. When we humans are exposed to extreme cold, we get frostbite. This happens because the water in our cells expands as it freezes, causing cells to explode. On the other hand, tardigrades handle the cold with ease. They release cryoprotectants, proteins designed to restructure ice as it freezes into a much less harmful form that won’t cause cells to explode.

Tardigrades handle extreme radiation with a similar strategy. Radiation is dangerous because it damages DNA, but tardigrades release a protein called Dsup, which reduces damage to DNA by around 40%. If a human received five gray of radiation, they would quickly die, but the mighty water bear can take up to 5000 gray without serious consequences. Now that’s really impressive.

Another strategy that tardigrades use to survive is called cryptobiosis, first observed in 1776 by biologist Lazaro Spallanzani. Basically, when a tardigrade is presented with an extremely dry environment without many nutrients, it curls up into a small ball called a tun, and enters into a death-like state. While in this condition, a tardigrade’s metabolism plummets to just 0.01% of normal activity, and water levels drop to about 3%. A special sugar called trehalose creates a protective medium that covers essential organs. A tardigrade can survive for many decades as a tun, but will not last forever, eventually dying. However, if a tun that has not perished yet is exposed to water, a happy water bear will emerge within hours, to resume life where it left off decades ago.

Tardigrades aren’t entirely invincible. A recent study this year revealed that a tardigrade’s weakness is simply high speed. Researchers collected tardigrade tuns and fired them out of a special gun that was able to control the speeds of its bullets. Tardigrades were able to survive impacts at up to 825 meters per second, but not much faster than that. That is still impressive, but it shows that even sturdy creatures like tardigrades cannot withstand collisions at extreme speeds.

Some may classify tardigrades as extremophiles, but this is actually wrong. Extremophiles are especially well-adapted to live in a specific extreme environment, such as extreme heat. However, tardigrades are not well adapted to any specific environment. Instead, they excel at living in all extreme conditions on earth — and in space. In this way, they are truly unique and resilient like no other organism on earth.